Opened somewhat quietly in late December, Santa Fe Brewing Co.’s new destination drinking spot, called the Beer Hall at HQ, could also be called “the Brewpub Different.” A brewery “destination” was the goal of New Mexico’s oldest and largest craft brewery, the –culmination of a five-year expansion plan envisioned by owner Brian Lock. Lock aimed to create an experience that stands apart from brew pubs in other cities, and with the views of the Ortiz Mountains alone; it’s safe to say he succeeded.

Though multi-storied, the Beer Hall is barely noticeable at first, yet once you get your bearings, there it is—tucked back from the parking lot across a 60,000-square-foot expanse of carefully planned landscaping. The open-air space is centered around a large, circular, sunken fire pit which, come spring, will be surrounded by grass, shade trees and plenty of picnic tables. The invitation to BYOBlanket is open for those who want to enjoy a beer picnic-style atop the rare feel (in Santa Fe) of green grass, and there will reportedly be some outdoor games and activities when weather permits. 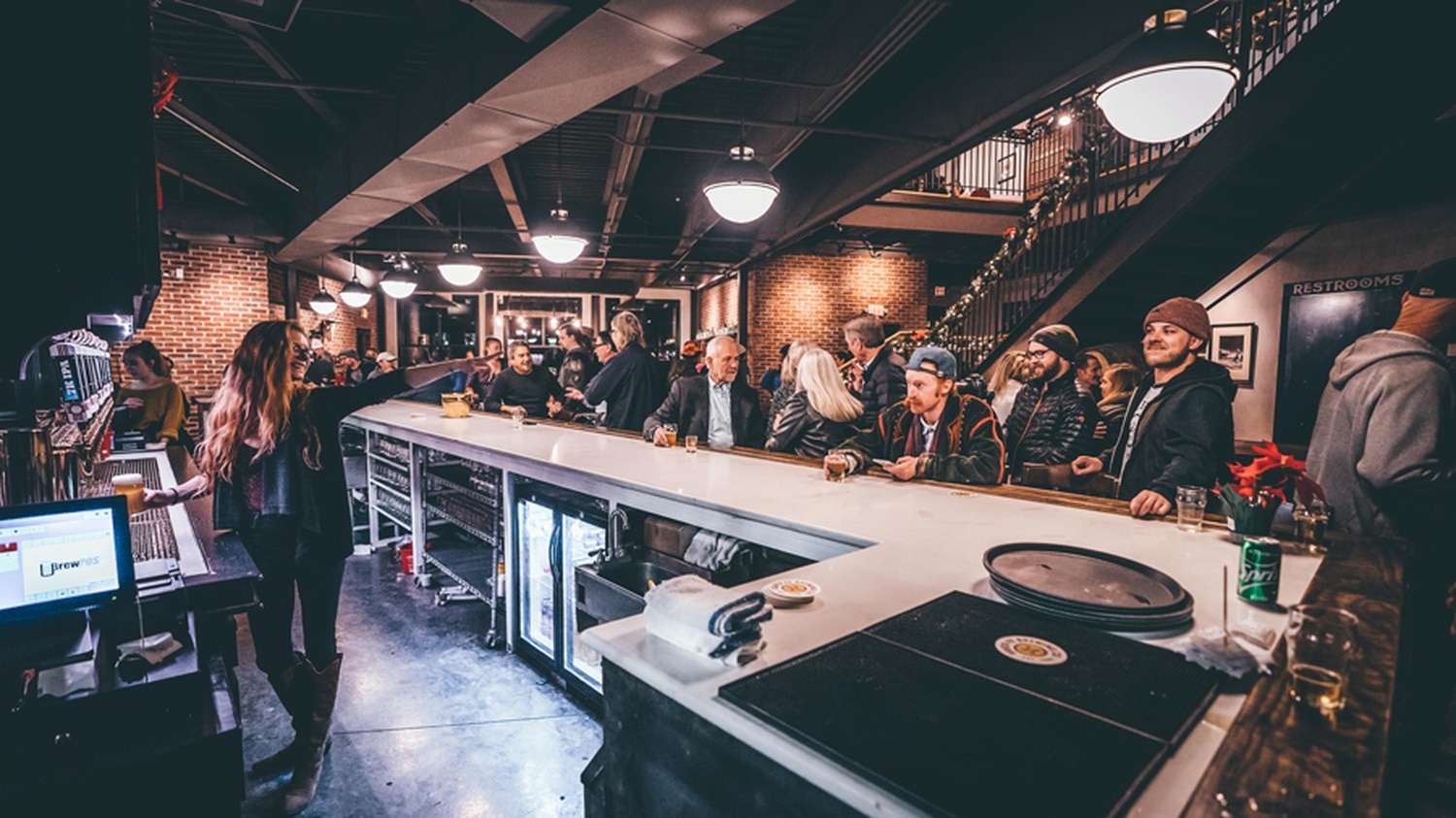 The Beer Hall itself is a 7,000-square-foot, two-story joint, anchored by a central staircase. The nearly floor-to-ceiling windows look out toward Cerrillos Hills and welcome in Santa Fe’s golden light; the indoor space is cleverly adorned with equal parts city/industrial, old Bavaria, and rustic/modern, plus thoughtful touches such as an impressive 18-foot long community table and, at the top of the stairs, a built-in museum case covering the brewery’s
30-plus year history. A retail shop for SFBC merch and beers solidifies the Beer Hall as a destination, not just a gathering place.

So, obviously, it’s a fun spot to visit and will presumably be even more so come warmer weather time. But let’s get to what’s really important—what you can put in your mouth. Currently on tap ($5 pint/$7.50 tasting flight) are nine of the brewery’s regular offerings, from the refreshing and light Pepe Loco Mexican style lager to a dark and delicious Imperial Java Stout. Seasonal brews also make appearances as they are available, and currently that’s the Adobe Igloo, a winter warmer with flavors of cocoa and red chile. Sitting at the long, dark bar, one can look to the left and see the tanks directly from which the beer is pouring; straight ahead is the canning line, with pallets of brightly-colored cans stacked floor to ceiling.

When it comes to food, Executive Chef Evan Doughty, who has been pumping out orders from a small food truck outside of the tasting room, is working on the build-out of a large shipping container space that should allow him to expand his menu come March. Though the current offerings are few, there are plenty of options, like a sweet and savory elote ($3) with spicy mayo, red chile and salty cotija. While there is an “A+ chimichanga” (starting at $3) on the menu, the tacos ($3-$4) earn more than an A+ with toppings like spicy thin-sliced radish, cumin cream and vinegar cabbage that put an extra tasty spin on what’s already a solid offering.

“We’re just waiting on building permits at this point,” Doughty tells SFR. “Once those come through I’m planning on greatly expanding the menu—ideally, doubling it.”

While the old one offered New Mexican and Mexican-influenced bites, Doughty plans for his new menu to be more “beer-centric,” focusing on shared plates and unique flavors not usual to Santa Fe.

“I’m playing around and looking to come up with non-traditional dishes that are fun to eat,” he says.

Asked to share some of his ideas, he mentions Scotch eggs, cheese and charcuterie plates and that a soup or stew will always available.

“I really want to do a Frogmore stew. It’s a low country boil from South Carolina that has Andouille sausage, corn cobs, potato, shrimp and crab legs boiled in beer and Old Bay,” Doughty says. “Ideally, you’d eat it old school-style, dumped on a picnic table with lots of butter. Like, dripping-off-your-elbows butter.”

Cooking out of the shipping container would give Santa Fe Brewing Co.’s culinary team more room to experiment and to continue growing. The container is currently bolted into the concrete in front of the Brew Hall, but can be moved as the campus continues to expand.

As for the Beer Hall becoming more of a destination, Doughty notes it is “really important to us to have the food -component so folks coming this far out of town can stick around.”

This Spring, I, for one, will be packing up my picnic blanket and heading south to find out what Doughty has in store. SFBC has its beer game together and the expanded food program sounds brilliant.