Back to All Events
June17

The transcendent new album from Ani Di Franco, Revolutionary Love (out January 29, 2021), marks the latest proof of one of her most powerful gifts as an artist: a rare... 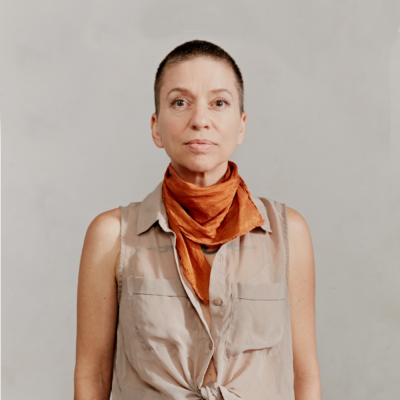 The transcendent new album from Ani Di Franco, Revolutionary Love (out January 29, 2021), marks the latest proof of one of her most powerful gifts as an artist: a rare ability to give voice to our deepest frustrations and tensions, on both a personal and political level. “My songs have always reflected an acute connection between my personal life and the life of my society,” says the trailblazing musician and activist. “As I started to come out of years of dealing with marriage problems, I saw my entire country in the same situation; the complete breakdown of communication and loss of empathy and connection. But after what seems like unforgivable damage, then where do you go? You can’t kick each other off the planet, you can’t change the past, so what then?”

As the 22nd studio album in an iconic career— a musical career which forged one degree of separation between Pete Seeger and Prince and the accompanying career of founding her own precedent-setting label, Righteous Babe Records—Revolutionary Love began taking shape in the final weeks before the Covid 19 pandemic came to change the plans of everyone everywhere. Returning home to New Orleans from a West Coast tour in February of 2020, with a new batch of songs written on the road, Di Franco found herself without a path to recording those songs and lost in the creative abyss of the collective need for social isolation. “And then I decided I wanted to start pushing this new music out by fall… before the election,” she recalls. “I felt very strongly that I needed a horse to ride to try to help get out the vote—to get people inspired and get them believing in democracy, believing in each other and in themselves.”

Di Franco began to explore using live recordings from the tour as the basis for the new album but then she reached out to her friend Brad Cook, a Durham, North Carolina-based producer/multi-instrumentalist known for his work with artists like Bon Iver and Waxahatchee. The two had kept in touch after crossing paths at the Eaux Claires Music & Arts Festival (an event co-founded by Bon Iver’s Justin Vernon, who appeared on Di Franco’s acclaimed 2017 album Binary), where she became enamored with one of Cook’s guitars. “Brad let me borrow the guitar and I ended up writing half this record on it,” says Di Franco. “I called him up and told him about the new pile of songs I’d pulled out of his guitar and about my recording predicament and he said to me, ‘Give me a week. If you can get yourself to Durham, I’ll take care of the rest.’”

The finishing touches were added in Eugene, Oregon with the inclusion of the Delgani String Quartet, arranged by Todd Sickafoose, and in Pensacola, Florida with the soulful pedal steel playing of Sacred Steel aficionado Roosevelt Collier. The instrumentation is rich but with many of the performances captured in one or two takes, Revolutionary Love reveals Di Franco’s tremendous gift for seizing the moment of performance and transforming confusion into clarity, pain into perseverance.

Revolutionary Love opens on its luminous title track, a profoundly resolute piece inspired by Sikh-American activist/filmmaker/lawyer/author Valarie Kaur. “A lot of the language in that song comes from Valarie’s book See No Stranger,” says Di Franco, who connected with Kaur after watching a talk she’d given in the aftermath of the 2016 presidential election. “It’s about carrying the energy of love and compassion into the center of our social movements and making it the driving force. It’s about finding it within ourselves to stay curious about our opponents instead of shutting down.”

One of several songs Di Franco composed at Kaur’s request (“She approached me and asked, ‘Can you write some songs for me?’” says Di Franco), “Revolutionary Love” wholly embodies the album’s defiant spirit of irrepressible hope. On lead single “Do or Die,” Di Franco channels that spirit into a slow-burning but anthemic call-to-arms, gracefully laced with falsetto vocals and finger-snapped beats. Centered on her incisive lyrics (“Cuz there’s foxes in the hen house/And bad news every day/And right there on Pennsylvania Avenue/The sheetless KKK”), “Do or Die” began as a poem Di Franco set to music on that early-2020 tour, then underwent a major shift during her sessions with Cook and drummer Yan Westerlund. “Brad suggested I slow it way down, to the point where it was almost at half-speed,” says Di Franco. “At first I thought, ‘This is the rallying cry of the record, and now all the energy’s gone. I fucked it up.’ But what I discovered was that the very deliberate, simple, open approach to the drums left me with all the room in the world to dance around the pocket with my words and guitar. It was incredibly liberating.”

Throughout Revolutionary Love, Di Franco hits a potent balance of determination and dreamy reflection, a dynamic that echoes one of the central lessons of Kaur’s maternal teachings: “If we don’t push, we will die. If we don’t breathe, we will die.” “I wanted to have these moments where, after we engage with all the insanity and strife, we step back and shake off the anxiety and the fear,” Di Franco says. “We all need that quiet space to reconnect with ourselves and our hope.” On “Simultaneously,” a softly spellbinding track lit up in lilting flute melodies, Di Franco speaks directly to the challenge in navigating the disconnect between a visionary inner life and a chaotic outside world (“I live in two different worlds simultaneously/The one where we are fractured/And the one where we are free”). “I look around and everything’s crashing and burning all around me,” says Di Franco, “but in my mind I can see this alternate reality playing out—one where we are all fulfilling our potential.”

Elsewhere on Revolutionary Love, Di Franco brings her nuanced storytelling to far more intimate narratives, the impact of her personal revelation intensely magnified by the rawness of the recording process. “It’d been a long time since I sat in front of a microphone and recorded a whole record in a number of hours I could count on my hands,” she says. “For years I’d been trying to piece records together by hook or by crook, overdubbing different elements at different times, lingering over all the details. But this thing was made more like it was 1968, with people performing on instruments made of wood and metal, laying down a few takes and moving on. It really brought out the prowess of the musicians involved and the immediacy of offering up a song to another human.”

The last word came from legendary producer, mixer Tchad Blake (Black Keys, Los Lobos, Tom Waits) who mixed the album, bringing both an old-school hard-pan aesthetic and a modern expressiveness to bare. Blake’s mixes are not retro 1968 but somewhere in the sonic landscape and in the songs we can hear the echoes of an era filled with the pain and possibility of change. We can hear the cyclical process of the labor of revolutionary love; the breathing and the pushing.

In looking back on the making of the album, Di Franco recalls the daily texts she received from her friend and former tour manager Susan Alzner, who lives in Flagstaff, Arizona. “She’s an activist who really feels the weight of the world on her chest. She goes for walks every evening to decompress,” says Di Franco. “The whole time I was making this record, she’d send me pictures of the sky from when she was out walking, and it always made me inhale more deeply.” So when it came time to choose artwork for Revolutionary Love, Di Franco landed on a series of photos from her friend’s nightly texts. “When people hear this record, I want them to get the same feeling I got from Susan’s sky pictures—that feeling of taking a minute to realize that the light is shining around us and through us,” she says. “Like, we can do this, we just have to stay open. We have to look up.” 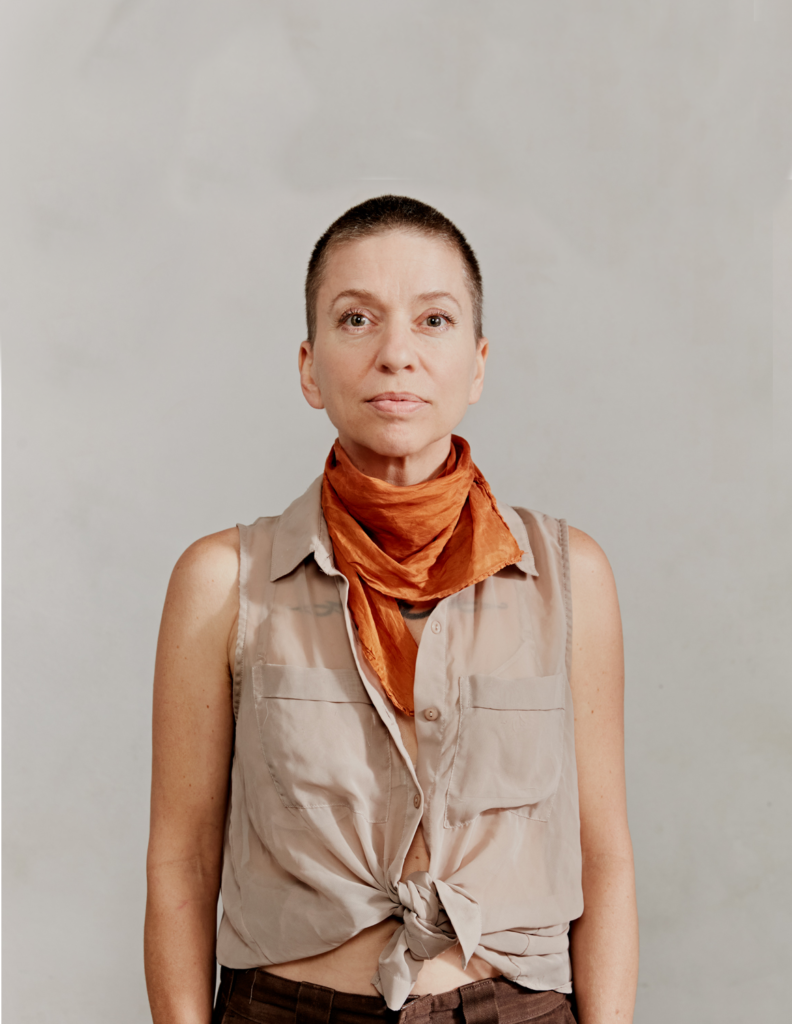 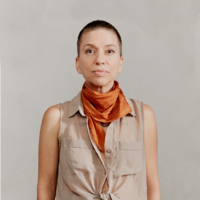 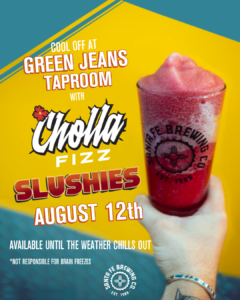 We’ll be serving up Cholla Fizz slushies at Green Jeans next week on Friday, August 12th! 🍧 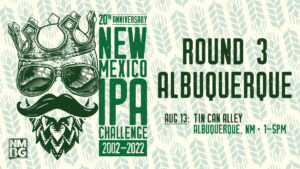 16 OF NEW MEXICO’S GREATEST IPA’S ARE GOING HEAD-TO-HEAD FOR OUR 20TH ANNIVERSARY IPA CHALLENGE! ROUND 3 IS THE FINAL ROUND AND WILL BE HELD AT TIN CAN ALLEY IN… 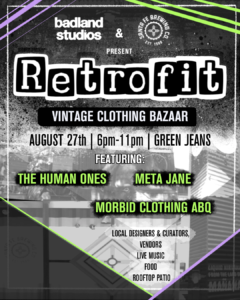 We’re partnering with Badlands Studios to host local clothing designers and vintage clothing curators across Green Jeans on August 27th! Don’t miss your opportunity to get some unique gear from…